If you have done any kind of work for justice in this world, you have likely heard something along these lines:

“Why are you always so critical? Can’t you see the [insert people in appropriate power position] are trying? Why don’t you give credit where credit it due?”

“Sure, he committed ‘non-consensual vaginal intercourse,’ but he’s a really nice guy and you’re not talking about any of the good stuff he’s done.”

“So the county commissioners put a down payment on a jail expansion without voter approval and before thorough efforts to reduce the jail population. But they’ve formed committees now. Give them a break.”

“Maybe Mennonite Church USA isn’t quite perfect in the area of LGBTQ justice, but look how far we’ve come!”

Give credit where credit is due.

“The scribes and Pharisees are mostly nice, good-hearted people, I’m sure. And their synagogues do so much good in the community. And many of them have helped out some orphans and widows on occasion. And, also, Woe to you scribes and Pharisees, hypocrites! For you lock people out of the kingdom of heaven.” (Matthew 23:13ish) 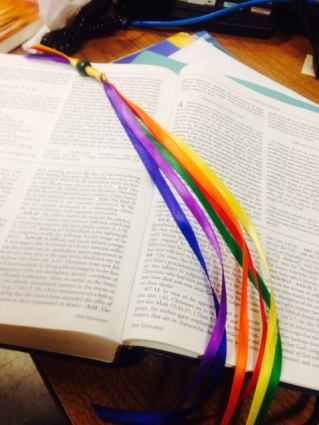 Actually, I don’t know. I wasn’t there. I’m just going by what Matthew said, and maybe he was a no-nonsense kind of guy, editing down Jesus’ speeches to get to the heart of the matter. Or he was writing on a deadline. Maybe Jesus did point out the good qualities of the scribes and Pharisees before he unleashed the “woe”s and called them a “brood of vipers.”

So, fine. I’ll give credit where credit is due.

So, credit. For ordaining women and adding the Q to LGBT and for allowing conference ministers to know about some of the most gifted and qualified pastoral candidates available in the Mennonite church today. Hip, hip, hooray for MCUSA.

Is that enough credit? Because now I need to get to the “woe to you” segment.

According to Ervin’s report, “the names of such persons” will not be published on the list of available ministers. These queer MLIs will only be supplied to conference ministers who specifically request them. Because the denominational leadership does not want to offend “conference ministers who oppose this practice.” (The practice of helping qualified pastors find placements? The practice of helping congregations connect with gifted ministers? The practice of being gay? Of having gay sex? Of having any sex? Ambiguous pronouns are so frustrating.)

This policy is problematic for many reasons, the first of which I feel rather ridiculous having to point out to a bunch of Anabaptists, but apparently it needs to be said: Avoiding offense is not a legitimate theological justification for church policy.

I am also painfully aware that this concern about offense is one-sided. In fact, I would argue that it is less offensive to have to look at the name of someone who interprets a particular point of scripture differently than you do, than it is to have your name excluded from a list because of your God-blessed identity.

Will I be critical that the names of “known” queer candidates are kept in what might as well be, according to one dear colleague, Ervin’s sock drawer? Yes. Of course.

Will I acknowledge that many people in MCUSA leadership are trying? Yes. Of course. God knows they are trying. I just wish they wouldn’t try quite so hard to avoid offending people. And maybe try a little harder to create just, Jesus-honoring denominational policies.

One thought on “Credit Where Credit is Due”