Here in northeastern Kansas fall has begun in all of its glory. The sun is shining. The air is crisp. It’s the kind of weather that makes me say, “Hey, let’s go for a walk to the ice cream place.” (O.K. It was the weather and the fact that we had coupons for free ice cream that were about to expire.)

So off we went. And part way to the restaurant a bird swooped out of the tree and onto the ground nearby. This bird was hard to miss because it almost hit my daughter’s head. And because it was BRIGHT. Green. Yellow. Blue. With a glowing red beak. 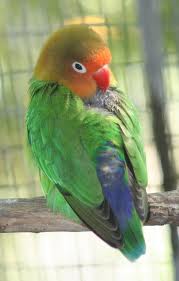 I am merely a beginning birdwatcher, but I was pretty sure this was not a species native to Kansas. Or anywhere in North America.

My suspicions were confirmed when I squatted down to look at the bird and he just looked right back at me. And as I moved my hand closer and closer, he didn’t fly away.

The problem is, I’m a little skittish around birds. I’m afraid they will nip me. My brain understands that this will not hurt much, but my hands remain unconvinced. As I tentatively reached for the bird, he hopped a little further away. And my children and husband were waiting impatiently for ice cream. And I didn’t know if we’d have time to get the bird, take him home, and get the ice cream. And, did I mention, I was afraid of getting nipped.

So I sighed and said, “Maybe he’ll still be here when we come back by.” Which, of course, he wasn’t. I looked. And then when we got home I took the flashlight and my oldest daughter and we went back and looked some more.

I told my husband, “I should have grabbed the bird when I had a chance.” And he said, “No, you shouldn’t have.” But I should have.

That was several days ago and I cannot walk past that bush without peering into it and hoping to see the bird. I have happy visions of what it would have been like to have such a beautiful creature in our house and reunite him with his owner. I have disturbing visions of the little guy dying of a chill or getting attacked by a wild animal.

I know it’s not a really big deal. But I can’t shake the wish that I had been less timid—or more resourceful; that I had got that bird in my hand when I had the chance.

I made a bad decision under pressure. And I realize how easy that is to do. I’m thankful that this particular bad decision has had relatively minor negative consequences; but I think of those who have made more drastic decisions under incredible pressure—those who have stolen, cheated, killed. Sure, you can argue about degrees of harm. Still, I am keenly aware how easy it is to do the wrong thing—the thing you can’t redo or undo.

I realize the grace that sustains me through all of the bad decisions I could make—but don’t.

Yet I am also aware that the decision I make in the split second reflects something about my deepest self. When I don’t have (or take) the time to think about what I will do, my actions emerge from who I am.

With the bird incident, I think my decision simply reflects the fact that I do not like to disappoint the people I love—which isn’t necessarily a bad thing. (Of course, it could reflect the fact that I value ice cream very highly . . . )

But what about the raised voice, the harsh words, the ignored need? What values do those actions reveal? Whenever my split second decisions do not reflect the peace, the justice, the kindness that God requires (Micah 6:8), I know I have spiritual work to do.

I can’t find the bird that got away. But maybe I can train my hand to move with more swiftness and confidence . . . for the next time.