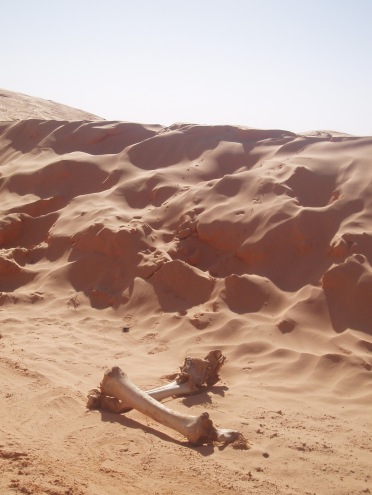 This week I saw a vision of bones. Well, more of an image than a vision. One might call it a photograph. There was a long table with colorful cloths folded and placed along both sides. On each folded cloth was a human skull. These were skulls of Native Americans. Bones that had been collected by the United States government during colonization and put in museums or used in college classrooms.

I heard about bones uncovered in a construction project at the University of Georgia. Bones from 105 unmarked graves. People that cannot be identified except to know that most of them were of African descent. And we know that in Athens, Georgia, in the 19th century, anyone of African descent was most likely a slave.

I heard about a female Iraqi reporter who was killed by an IED when she went to investigate a sinkhole in the desert, just outside the village of Albu Saif. This sinkhole is one of the largest mass graves in the area; a place where ISIS has dumped hundreds, if not thousands of bodies. Most of those bodies have likely not decomposed yet. But they will soon be reduced to bones.

And now we hear about more bones. Dry bones in the valley where God has set down the prophet Ezekiel. These bones also tell a story; a story that was familiar to people in the ancient Near East. It’s a story of war. Of a battle in which one side lost decisively and their bodies were left to rot and roast in the desert sun. We know this was a familiar story because there are ancient Asyrian relief sculptures that show battlefields with dead bodies scattered around. Vultures flying overhead, some carrying pieces of the bodies in their talons.

When Ezekiel sees this valley of very dry bones, he sees the violent, devastating history of his people—the Israelites. He sees the Babylonian army laying siege to his hometown of Jerusalem; two years of non-stop attacks. He sees his family and friends trapped inside the city, dying of hunger and disease. He sees the Temple destroyed. His fellow citizens killed. And those not killed rounded up, with him, and forced into exile in Babylon.

The desolate landscape of bones must have looked familiar to Ezekiel. But what God did with the bones was anything but familiar. Theology professor Corrine Carvalho describes this scene from Ezekiel as “the inversion of the Assyrian reliefs.” Where the reliefs show bodies being torn apart, Ezekiel watches the bones come together, the muscles forming, the skin covering the bodies. Instead of a battlefield becoming a bone yard, Ezekiel watches as the Spirit of God transforms a bone yard into a “vast multitude” of people standing on their feet.

In these fourteen verses, the Hebrew word for spirit—ruach–occurs nine times. It’s harder to notice in English because it gets translated as spirit, breath, wind. But in Hebrew it is all the same word. Ruach. And it is everywhere.

It is this holy ruach that breathes life into even the most desolate situations. It is God’s spirit that pulls together the shattered pieces and creates new life. That is to say, it is not our energy or our wisdom or even our sheer willpower that will cause these bones to live.

And yet, in bringing new life to the people, there was a role for Ezekiel to play. And surely there is a role for us in God’s continuing efforts to bring healing and wholeness in the world.

Links of Interest for Lent 5A: