The family was camping yesterday, so I had a lovely break from the computer. But Grace and I did not take a break from our 30 Days of Creativity! We decided to create a game. It’s called “The Rock Throwing Game.”

First, we made six rock circles (about 5″ in diameter) several feet apart from each other.

Then we each selected a “throwing rock” and took turns trying to throw our rocks into the rock circles.

And for today, we made a board game. I cut out squares of different colored construction paper, plus some special white squares with stars (indicating to draw a card) or directions (i.e. “move ahead 2 spaces”) on them. Grace decided the game would be about ducks trying to get to the pond, and she glued down all of the pieces inside a box. We made some activity cards like “Waddle like a duck” and “What would you name a pet duck?”. (There is also the questionable, “Say a word that rhymes with ‘duck.'”  I made that suggestion before I really thought it through. ) 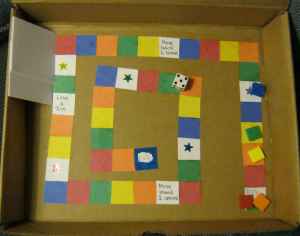