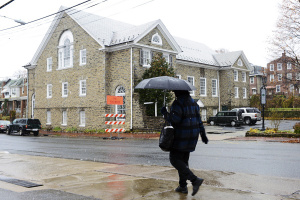 There’s been a lot going on in my beloved city of Philadelphia, and so much of it is heartbreaking.

On election day, a few weeks ago, there was a shooting at the gas station across the street from my church.  I was in the church at the time, as were the polling volunteers, and several voters. School was out, so there lots of people–young and old–moving up and down the street.

After I watched part of the shooting from the window of my church office, and saw the victim get into his car, and race away, I called 911. I ran downstairs to check on the rest of the folks in the building, and found them huddled together in fear. I was filled with anger. Why is this happening in my neighborhood?  What were these guys thinking, settling their disputes about family issues with guns and in such a public place?

How I wish that God would tear open the heavens and fix this mess! 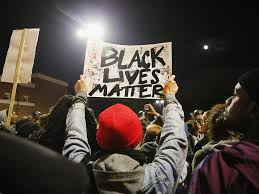 On Monday, we heard the news from Ferguson, that there would be no indictment for Darren Wilson, the police officer that shot and killed Michael Brown. I gathered with other Philadelphia clergy to hear the decision, and we grieved and marched in the streets of Philadelphia. We offered a peaceful presence in the march as young people of color expressed their rage at the injustice as they screamed, “Hands up, don’t shoot!” and “No justice, no peace!”

That night, I wanted the sky to open, and for God’s justice to rain down on this terrible system we have in place. Instead police helicopters watched the protests from the sky, and officers on bikes and on foot surrounded the protest.

“Tear open the heavens!” This was the cry of the people of Israel in the diaspora. “Tear open the heavens, God! Fix this mess, just as you have in times before!” They too had enough of their enslavement, of a system that was not in place to protect them. They cried out to God to rescue them, to save them from this mess.

This passage from Isaiah introduces Advent this season with our communal cry for help and salvation. “Help us!  Save us, God!” And what we later learn from the incarnation, is that God is already here; the reign of God is among us. We don’t have to beg God to rip open the sky because God is present among us. This is what my friend, Bishop Duane Royster, reminded the angry crowds in Philadelphia on Monday night, “God is here with us, sharing in our pain.”

There’s been a lot going on in my city, and so much of it is heartbreaking.  But there is still hope. 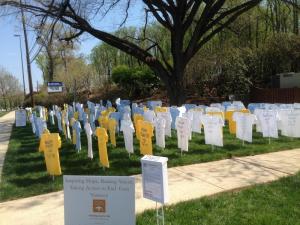 While I’ve been angry about the violence that threatens the neighborhood I live in and love, I’ve been encouraged too. The week of the shooting across from the church, I drove by another neighborhood church and found a memorial to the victims of gun violence in their front yard. I’m not alone in feeling this anger and pain. Others hold it with me. And we’re trying to do something about it.

My heart has broken for the family of Michael Brown, for Ferguson, and for all the places in our world where the laws and systems in place to protect are skewed against people of color.  But, while marching in the streets of Philadelphia on Monday night, I received a series of texts from my thirteen-year-old son–he wanted to know the verdict, and how people were doing. His heart was breaking too. Living in a multi-racial city, and going to one of the most diverse schools in the state, he understood what this verdict meant. He and all the young folks marching in Philadelphia gave me hope that maybe the next generation could do this better, and that perhaps we may learn from this death.

This is what the incarnation looks like. We cry for God to save us, yet God is already here, embodied in human flesh, and walking with us.

The violence in my city feels unbearable some days. The events of Ferguson make me question our humanity. But God is here among us, feeling the pain with us, weeping and mourning with us. We look up, we cry out for God to tear open the heavens, but God is here–the incarnate one, God with us.

Amy Yoder McGloughlin is the pastor at Germantown Mennonite Church.  She blogs at Stories from the Red Tent, and is a regular contributor at Practicing Families and the Mennonite World Review blog.