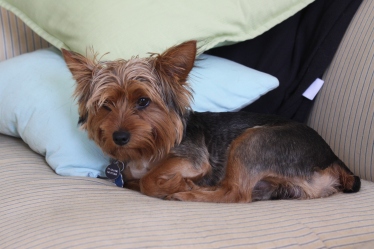 A recent Facebook apology from my teenage son: “I’m sorry but I have nothing to do with that.”

And an apology from the moderator and executive director of my denomination: “We apologize to . . . anyone . . . who may have gotten the impression that Executive Board leaders were not fully committed to justice and healing for victims [of sexual abuse].”

I’ve always thought that apologizing was a pretty simple task, one we learn at a young age: “Joanna, tell the dog you’re sorry for dragging him around the house in a pillow case.” “I’m sorry, Fluffy.”

That’s it. That’s an apology. Pretty straight forward. But apparently beyond the grasp of many people.

So, as a public service, here are ten ways to tell that your apology is not really an apology:

If you are having trouble crafting a sincere apology, I offer you this template from my younger self. You will need to replace the bracketed words to fit your own situation:

Dear [Fluffy]. I am truly sorry that [I put you in a pillowcase and pulled you around the house]. I am sure you did not like that and I should not have done it. Next time I will [put my stuffed dog in the pillow case] instead and give you a [dog bone].