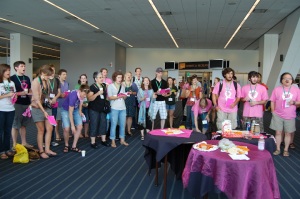 If you have been reading recent statements by Mennonite Church USA leaders, or even engaging in more private conversations about the inclusion of LGBTQ people in the Mennonite church, you have heard the term “third way.” A lot.

Coming from denominational leadership, third way seems to be code for status quo. Calls for people to adopt the third way boil down to: “Let’s everyone just calm down about all of this gay people stuff so that the church doesn’t split.” The “third way” is presented as simply a complacent middle ground.

And that’s a fine way to use the term “third way” in the secular world. The Wikipedia entry for “Third Way” defines it as a political philosophy that “tries to reconcile right-wing and left-wing politics.” So for the sake of political sanity, if we’re seeking political expediency, we can talk about about the third way as a coming together of two opposing sides, as a place to be concerned about our “rhetorical tone”, as Ervin Stutzman puts it.

But I am not looking for political sanity or expediency in my denomination. I am looking for faithfulness to the way of Jesus. In our church discussions, we should not be invoking the secular meaning of the third way, we should be thinking hard about the theological meaning of that term.

Walter Wink uses this term to describe Jesus’ teachings about turning the other cheek and walking the extra mile. In Jesus’ day, a Roman soldier was allowed to force a Jewish peasant to carry his gear for one mile. So if a soldier thrust his gear on a peasant, the two obvious responses were for the peasant to throw the gear down and refuse to walk or to carry the gear one mile. The third way is to carry the gear two miles. The first mile is required, but the second mile is a choice–a choice that would probably confuse the soldier, possibly even get the soldier in trouble if his superiors thought he was breaking the rules.

From a theological perspective, there are a few things we need to understand about the “third way.”

First, the third way is not for white, middle-class, straight men. Theologically speaking, the third way is for those who are oppressed. It’s for the one who gets slapped on the cheek–not the one who does the slapping. It’s for the Jewish peasant weighed down with military gear–not the Roman soldier. And, in the context of our discussions about sexuality, it is for queer Mennonites who have been demeaned and excluded by the church–not for us straight people.

Second, the third way is not synonymous with being nice to each other. I mean, there is nothing wrong with being nice to each other, but that is not what the third way is about. The truth is that Jesus’ “rhetorical tone” varied widely depending on who he was talking to–and possibly how tired and cranky he was. He spoke gently to the children and the woman caught in adultery. He got testy with the disciples. He called the Pharisees and Sadducees a “brood of vipers.” He turned over the money-changers’ tables in the temple. If the third way means following Jesus, then it cannot also mean smiling and nodding and trying to make everyone happy all of the time.

Finally, the third way does not have to do with compromise, or even synergy. There are plenty of texts in scripture that do talk about the early church–the gifting of the Spirit, the way that disagreements were negotiated, the importance of love and humility in community. So there is a place for synergy–and even compromise–when it comes to many of the questions we face as churches. But if we are talking about compromise, we are talking about something different from the third way. The third way is for people who have no power to negotiate a compromise or participate in the decision-making synergy.

Which means that, ultimately, our goal should be to have no need of a third way within the church. When all people are respected and power is truly shared, then the third way is not needed. When there are no longer oppressed people within the church, then we will be better able to live as the true church, walking the third way together with the powerless out in the world. Just like Jesus did.