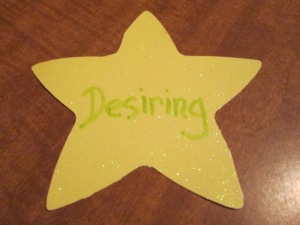 On Epiphany, fellow pastor and blogger Marci Glass was giving out star words–words to hold and ponder and listen to in the coming year.

My word is desiring. And it has woven its way through these past five months with glitters and shimmers and quavers and shouts and sighs too deep for words.

The good Christian girl–the Mennonite–in me was suspicious of this word from the beginning. Isn’t desire something that just gets us in trouble? It leads to unplanned pregnancies and obesity and credit card debt and any number of other evils.

Yet as I wrote this word out on a sparkly yellow star and rolled it around in my mind and heart, it began to shine a little. To seem less scary. To feel a bit like permission.

If “desiring” is my star word, my spiritual guide for the coming months, then surely my desiring is of God. Surely my desires are not wicked, but are God-given, grace-filled. I began to think more about what I did desire, and how my desiring was part of God’s broader desires for the world.

And then, at the end of February, my dad went into the hospital. All of my lovely, spiritually enlightened ponderings about desire were overwhelmed by the one, intense, unbearable desire that my dad be made well.

At first, this was a desire for a diagnosis. I thought that if we could just name his disease, they could make Dad better.

When I got what I desired, I didn’t want it after all. Because the diagnosis was aggressive killer cell leukemia/lymphoma. It was a death sentence. And my deepest desire was for my dad to not die. For him to not be in the hospital with oxygen flowing into his nose through tubes, barely able to talk, having to call in a nurse to help every time he had to urinate.

If you have ever desired something impossible, you know how it feels. Like your soul is banging itself against a brick wall. And the wall doesn’t give. And your soul won’t stop. Every time it flings itself it just hurts worse because it’s already so battered and bruised.

Despair–that’s probably what you’d call it. I assume that Marci didn’t give anyone “despair” as their star word. Because it’s not a star. It’s a shadow–the shadow side of desire. When desire sucks you into a black hole of hopelessness.

The tendency, I think, is to save ourselves from despair by moderating desire. By trying not to want anything too much. This is certainly not a way to live life to the fullest, but it can work in staving off despair–until it doesn’t.

We fall in love. We get sick. We watch someone we love waste away. And the desire sparks and burns into despair.

In my dad’s hospice room, there was a moment . . . When he didn’t have the energy to speak. When his breathing was labored, hollow. When we knew the disease was poisoning his whole body. When his children, wife, grandchildren were gathered around him and the Hallelujah chorus was playing. There was a moment when my deep desire shifted and I desired, for him, his release from that broken, breaking body.

A shift in desire. To desire something we don’t really want–something painful in its goodness, heart-wrenching in its holiness. Is that a form of grace?

I have more to say about the twinkling of the desire star in my life this year. Those words will come later. I need to sit with these words for awhile.

4 thoughts on “Living with “Desire””